There are various connectors to join cables and components used in industrial automation. These connectors must transmit all power and data-signal streams carried over the cables while terminating the line in a way that keeps the conductors tightly connected and protected. The challenge is that equipment associated with industrial automation is often located in dirty, hot, mobile, and electrically noisy settings … so industrial cable connectors require a level of robustness and reliability not necessary for other applications.

First, consider some industrial-connector basics: Connectors include the components classified as couplers (which join two cables) as well as systems that include both the plug and socket (or receptacle) halves of a connector assembly. In some contexts, the term connectors can also refer to cable glands — terminations that pass through enclosures … often with a free-spinning subcomponent that acts to compress an O-ring seal around the cable end to close it off from chemicals, flames, dirt, and extraneous currents.

Industrial cable connectors join cables (more commonly) at front and rear-mount equipment receptacles. All connectors and cable glands have ingress protection (IP) ratings as defined by IEC 60529 that quantify their resistance to dirt and moisture. These ratings are the same as those used to describe the ruggedness of component housings as well as industrial equipment enclosures. An IP code has two digits, with higher values indicating a higher level of protection for both.

The first IP-rating digit specifies the level of protection from solid objects such as dust — ranging from 0 for no protection to 6 for dust-tight sealing.

The second IP-rating digit specifies the level of protection against fluids — ranging from 0 for no protection to 8 for continuous protection from water at a depth of 1 m.

Ethernet defined by IEEE 802.3 remains the most widely used local area network (LAN) technology anywhere. Ethernet-based communications standards for industrial automation include ModbusTCP/IP, EtherCAT, Ethernet/IP, and Profinet. The connectors commonly associated with Ethernet cables are the ubiquitous registered jack (RJ) connectors. Most RJ connectors include a plug having a simple plastic tab that clicks into mating geometry on an RJ socket to securely hold the two together. The plugs and sockets easily fit to cables — and installation personnel can simultaneously clamp them and make the electrical contacts using a special-purpose crimping tool. Crimping terminators allow for the construction of custom-cut cables (fitted onsite) that are reasonably reliable. Plug subcomponents designed for such onsite installation often have clear bodies to let installation personnel inspect all internal contacts before putting them into service. That said, the reliability of factory-assembled cables is unbeatable.

Figure 2: This is a TL2253-ND hand crimper tool that allows in-field RJ-plug termination of four, six, and eight-wire Ethernet cable cut to length. With one squeeze the tool’s blades strip flat or round Cat5e and Cat6 and secure the connector body. (Image source: Tripp Lite)

Where RJ connectors aren’t rugged enough for a particular industrial environment, M12 connectors may be better. That’s because M12 connectors provide a more reliable and physically robust connection — with the added advantage of protection against the ingress of dust and fluids.

Power over Ethernet (PoE) defined by IEEE 802.3 is a convenient way to obtain both data and electrical power through a single cable. PoE Alternative A (often called mode A) uses the same two twisted pairs to carry both data and power, so cables with fewer cores can be used — and bandwidth is limited to 100 Mbps (100BASE-TX). PoE Alternative B (often called mode B) uses a Cat 5 Ethernet cable with four twisted pairs — two pairs carrying data and two pairs carrying power. This reduces the bandwidth available for data — limiting the data rate to 100 Mbps even when the cables are rated for Gigabit Ethernet.

4PPoE or four-pair cable requires a cable with four twisted pairs of conductor strands and all transmitting both power and data. This means that higher data rates (Gigabit Ethernet and beyond) and currents are supported. Devices accepting power over PoE must be configured to accept mode A or mode B as it’s supplied. That said, they may use fixed or alternating resistance across wire pairs to indicate compatibility and request a specific power configuration. Of course, it’s PoE power supplies (the sourcing equipment or PSE) that actually determine the system’s PoE mode.

Figure 4: The connector design is largely dictated by the cable it terminates. M12 Ethernet-cable connectors such as the ones shown here are generally more robust than RJ connectors; some manufacturers color-code them to indicate compatibility with PoE modes and conductor arrangements. (Image source: Lumberg Automation)

Terminating both data and power cables (as well as network cabling such as industrial Ethernet, PROFINET, and Fieldbus) are M-series connectors — round mating connectors with a threaded female sleeve (to mount on a male receptacle) wrapped around an array of conducting pins. M8 (8 mm) and M12 (12 mm) threads are most common but M5, M16, and M23 are also familiar standards. The positive (screw-on) closure of M-series connectors ensures a highly reliable connection that minimizes intermittent signals even while protecting against the environmental debris so common to washdown and corrosive environments. No wonder M-series connectors are a top standard on the cables for actuators, PLCs, sensors, switches, and controls of industrial automation.

M8 and M12 connectors may have two, three, four, five, eight, or 12 pins (also called positions). Sensors and power supplies generally require three or four pins. For M-series connectors on the ends of Ethernet and PROFINET cables, four or eight pins are needed. In contrast, those on the ends of cables carrying Fieldbus, CAN bus, and DeviceNet data usually have four or five pins. Of course, cables carrying multiple data and power streams may require termination with an M-series connector having all 12 pins.

Figure 5: This Brad Ultra-Lock 120108 right-angle connector is a proprietary adaptation of an M12 connector design to boost reliability. (Source: Molex)

In fact, one related connector-receptacle design that’s quite common in the industry is the pin-array-and-socket pair — originally introduced by Molex so it is sometimes referred to as Molex interconnections in the vernacular. The proprietary Molex Brad series of connectors are based on M12 connectors but replace the threaded sleeve with a more convenient and reliable push-to-lock system. Because the locking does not depend on the operator tightening a thread, it ensures reliability and minimizes the risk of an intermittent signal. Brad connector variations include:

With conventional system integration approaches, cables are “made up” — measured, cut, and terminated — onsite during the installation of the automated equipment. That usually means an onsite electrician cuts the required cables to length, strips all their conductors’ delicate sheathing, and fits the cables with the connectors required to join the components at hand. Such in-field cable preparation is time-consuming and leads to variable connection quality. That’s why the trend now is to source modular cable and connector systems consisting of standard cables and factory-fitted connectors. Required cable lengths are determined during design and supplied ready to install.

Some estimate that modular cables reduce onsite installation time by 60% to 70% while improving the reliability of the electrical connections.

The special case of cable glands

Cable connectors called glands are used wherever cables pass through an enclosure. Glands serve three purposes — securing the cable, preventing cable wear, and providing a seal around that cable to shield components inside the enclosure from environmental debris. The way in which cable glands secure the cable essentially prevents damage to electrical contacts from yanking or other disturbances. It also prevents the cable from scraping or rubbing against the sharp sheet-metal edge of the enclosure cutout. That’s important because sheet metal can easily saw through cable sheaths and eventually cause the cable cores to short.

Devices used for industrial automation often require a wired power supply in addition to a data connection. The relatively new technology of PoE mentioned earlier is preferable where it’s possible to use because it keeps cabling so simple. However, the vast majority of automation components and systems require traditional power cords.

Connectors standardized by the International Electrotechnical Commission (IEC) are common on power cables for consumer and office as well as industrial applications. The IEC defines a range of non-locking connectors in the IEC 60320 standard with voltages to 250 V and current not exceeding 16 A. Here, the C13/C14 connector is commonly used for electronic equipment — including computer power supplies. Larger C19/C20 couplers are used on the ends of cables carrying higher current — including server enclosures, for example.

For more critical or demanding applications, IEC 60309 connectors are often preferred. These plugs, sockets, and couplers are expressly intended for industrial use and can carry voltages to 1,000 V, currents to 800 A, and frequencies to 500 Hz. All of these connectors provide some level of resistance against water ingress: IP44 connectors are splash-proof, IP67 connectors are waterproof, and IP66/67 connectors can reliably prevent ingress even when subject to pressurized waterjets. Socket outlets may also be interlocked so that the socket cannot be energized unless it’s mated with a plug — and the plug cannot be removed until the power is switched off.

Different sizes of IEC 60309 connectors are used for different current ratings. The connectors are also keyed and color-coded to indicate their voltage and frequency range:

There are many geometry and integration options when it comes to selecting connectors and glands for industrial automation. During the specification of a cable for a given automated piece of machinery, the first consideration for design engineers must be the cable core count and the cores’ gauges. Ingress protection and the need for a positive lock to prevent intermittent signals are the next-most important considerations. 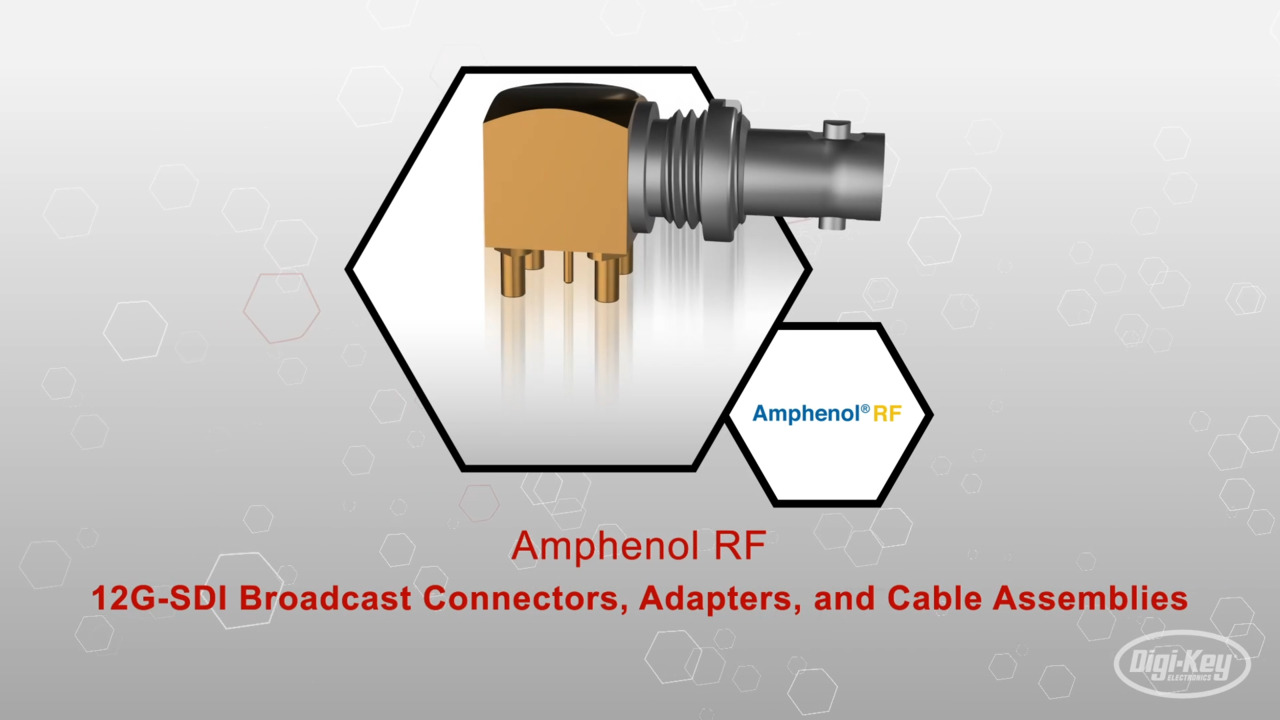 RF Connectors Pomona's RF connectors including BNC, F, N, SMA, and MCX, the differences between the connectors, and the applications for which each are suited.
RF Connectors Adapters and Kits An overview of the RF Connectors, Adapters, and Kits offered by Pomona Electronics.
00 Series NIM CAMAC The 00 NIM CAMAC series offers compact 50 Ohm coax with push-pull latching, a broad range of housings and adapters, and premium materials.

Lisa Eitel has worked in the motion industry since 2001. Her areas of focus include motors, drives, motion control, power transmission, linear motion, and sensing and feedback technologies. She has a B.S. in Mechanical Engineering and is an inductee of Tau Beta Pi engineering honor society; a member of the Society of Women Engineers; and a judge for the FIRST Robotics Buckeye Regionals. Besides her motioncontroltips.com contributions, Lisa also leads the production of the quarterly motion issues of Design World.